Wicked meets The Little Mermaid in the captivating origin story of the sea’s most iconic villainess, perfect for fans of Heartless and Dorothy Must Die.

Ever since her best friend Anna died, Evie has been an outcast in her small fishing town. Hiding her talents, mourning her loss, drowning in her guilt.

Then a girl with an uncanny resemblance to Anna appears on the shore, and the two girls catch the eyes of two charming princes. Suddenly Evie feels like she might finally have a chance at her own happily ever after.

But magic isn’t kind, and her new friend harbors secrets of her own. She can’t stay in Havnestad—or on two legs—without Evie’s help. And when Evie reaches deep into the power of her magic to save her friend’s humanity—and her prince’s heart—she discovers, too late, what she’s bargained away.

The sea is a fickle witch. She is just as likely to bestow a kiss as to steal the breath from your lips. Beautiful and cruel, and every glimmering wrinkle in between.

Hello, bookworms! I hope you are all staying safe and healthy during these times. I just happened to finish listening to Sea Witch on audiobook this past week! This book had been on my TBR for quite a while, so I jumped at the chance to buy the audio when it was on sale for only a few dollars. Unfortunately, Sea Witch did not live up to my expectations, and I really think it could’ve offered more. I really wanted to love it, but there were several aspects that kept me from giving it a higher rating than a 3.5.

Let’s begin with some initial thoughts:

Here is a brief overview of my thoughts regarding the characters and romance:

I did like the flashbacks in between chapters. They helped create a dash of intrigue to keep me listening to the story.

The end/epilogue does provide a twist I enjoyed, and it hints at the sequel. It sounds like book two will reflect the little mermaid tale we’re more familiar with.

Sea Witch was not a terrible book. It just wasn’t my favorite retelling. I also wasn’t a huge fan of how the audiobook narrator performed the voices of the two princes. Their voices threw me off a bit, and sometimes Nik sounded a bit girlish to me lol. But I already own the sequel in hardcover, and I may read it since the epilogue was intriguing.

Thanks for reading my honest review! I do understand that every novel is the product of an author’s hard work and effort. I definitely intend to give this author’s writing another chance with The Princess Will Save You. It sounds like a fun retelling of The Princess Bride! Happy reading, and enjoy the rest of your weekend 🙂

Up Next on My TBR: A Golden Fury 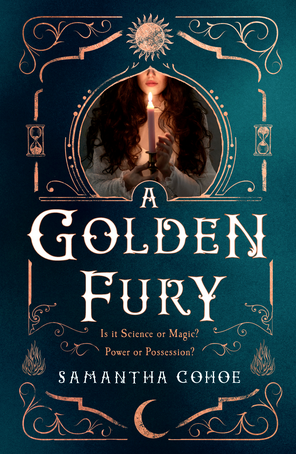