*I received a free copy of this book from the publisher. These are my personal, honest opinions. Thank you.*

Can love survive the dark?

No matter how far she runs, the forest of Edgewood always comes for Emeline Lark. The scent of damp earth curls into her nose when she sings and moss creeps across the stage. It’s as if the woods of her childhood, shrouded in folklore and tall tales, are trying to reclaim her. But Emeline has no patience for silly superstitions.

When her grandfather disappears, leaving only a mysterious orb in his wake, the stories Emeline has always scoffed at suddenly seem less foolish. She enters the forest she has spent years trying to escape, only to have Hawthorne Fell, a handsome and brooding tithe collector, try to dissuade her from searching.

Refusing to be deterred, Emeline finds herself drawn to the court of the fabled Wood King himself. She makes a deal—her voice for her grandfather’s freedom. Little does she know, she’s stumbled into the middle of a curse much bigger than herself, one that threatens the existence of this eerie world she’s trapped in, along with the devastating boy who feels so familiar.

With the help of Hawthorne—an enemy turned reluctant ally who she grows closer to each day—Emeline sets out to not only save her grandfather’s life, but to right past wrongs, and in the process, discover her true voice.

The woods came for Emeline the way they always did: creeping in with the shadows, seeping up through the cracks. Emeline, they whispered. Sing us a true song.

Hello, everyone! What have you been reading? I finished reading Edgewood a few days ago and am here to share my thoughts with you all. Sadly, I didn’t enjoy this book as much as I initially thought I would.

Let’s jump into some of my initial thoughts:

Here is a brief overview of the characters and romance:

The final quarter of the book also dragged a bit for me; it seemed like the ending kept getting stretched out again and again. And I started to wonder when the real climax was going to be.

In my opinion, the reveals took a little too long to get to, and by that time, I had already guessed several of them. In one of the big reveals toward the end of the story, a lot of info is dumped on the reader in a single, long chapter.

Also, why doesn’t Joel bring up what happened in Emeline’s grandpa’s house when he visited Edgewood? It doesn’t really seem like he freaks out much, and the incident isn’t mentioned again.

Despite the things I’ve mentioned, I am thankful for the opportunity to read this and would still give this author’s other books a chance. I think it is important to acknowledge that every book is the product of an author’s hard work and effort, and I liked the way the book actually ended in the final chapter. It was poetic in a way and romantic. This book probably would’ve been a 3-star for me, but the ending bumped it up to a 3.5. Other readers may still enjoy this book more than I did. Happy reading 🙂

*Content Warnings: Several uses of the f-word; sex scenes more on the New Adult level (not fade-to-black); some fantasy violence.*

Up Next on My TBR: A Forgery of Roses (ARC) 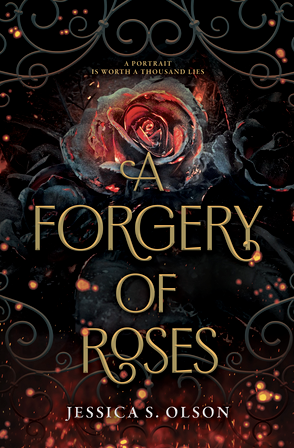